I wish I could say more about my photographs of the week, like the why’s of them. I feel like there should be reasons for each of them; ‘reasons’ meaning meaning, beyond just something I saw.

I think I have absorbed the idea of productivity, that everything must toward a useful end.  No meaning without purpose. Everything must do something.  An eye sees, a hand holds, a brain thinks, a photograph . . . does what?

When I watched the Beatles documentary, Get Back, the best bits were the parts where in between rehearsing songs for the album they were making, they just played cover songs; just goofing having fun playing songs that made them happy and were surely why they started making music in the first place. Just playing.

There are times when I ride around and I am absorbed by the feeling that if I just had this bike and this camera around my neck, sailing along in search of whatever, I’d be fine. I’m not thinking when I take pictures, and not thinking is the point of taking them. I think. A brief moment when I am just whatever it is I am doing. Of course, I always am just whatever I am doing, it’s just that most of the time I’m aware of that and thinking about it. Those moments are ineffably difficult to achieve with writing, which is just thinking by way of moving my fingers, a kind of talking out loud to myself, which I also do; you can tell I’m thinking about something because my lips move with muttering frustrations.

But not when I’m taking pictures. Not often at least. When I get home I almost don’t want to look a the results; rather save those moments of thoughtless bliss.

The week started out wet, leaving behind shining pavements, but the light lasts later, sunsets sliding past 6pm, leaving time for short sunset walks after dinner.

Rain droplets linger on leaves of the budding flowers down at the locks(which apparently stresses them out), and a blue heron hunts hapless prey in a drained lock, while another lingers photogenically at Golden Gardens.

Someone goes around Seattle painting faces and characters on dumpsters and concretes blocks and I like it. 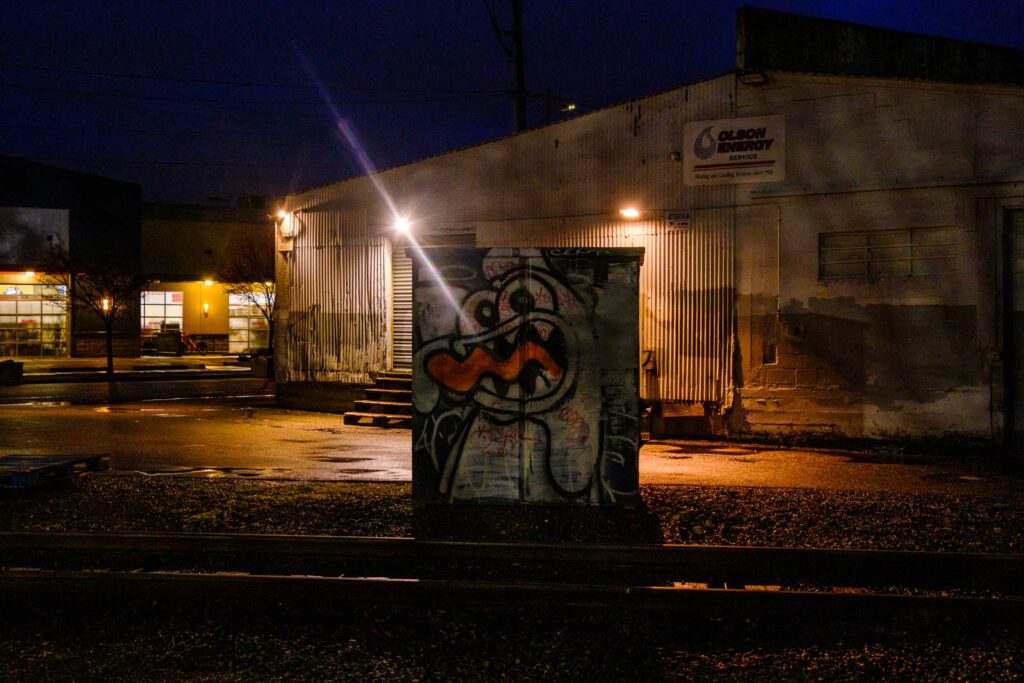 Sometimes you see a composition you like and that’s all there is to it.

Camellia blossom and old trucks decay in a lovely way.

This site uses Akismet to reduce spam. Learn how your comment data is processed.